"Alas, I cannot give a more considered response right now as I have to get on the road. But I do want to say that this searing, nuanced, gut-wrenching, loyal, and deeply, deeply Christian speech is the most honest speech on race in America in my adult lifetime. It is a speech we have all been waiting for for a generation. Its ability to embrace both the legitimate fears and resentments of whites and the understandable anger and dashed hopes of many blacks was, in my view, unique in recent American history.

And it was a reflection of faith - deep, hopeful, transcending faith in the promises of the Gospels. And it was about America - its unique promise, its historic purpose, and our duty to take up the burden to perfect this union - today, in our time, in our way.

I have never felt more convinced that this man's candidacy - not this man, his candidacy - and what he can bring us to achieve - is an historic opportunity. This was a testing; and he did not merely pass it by uttering safe bromides. He addressed the intimate, painful love he has for an imperfect and sometimes embittered man. And how that love enables him to see that man's faults and pain as well as his promise. This is what my faith is about. It is what the Gospels are about. This is a candidate who does not merely speak as a Christian. He acts like a Christian.

Bill Clinton once said that everything bad in America can be rectified by what is good in America. He was right - and Obama takes that to a new level. And does it with the deepest darkest wound in this country's history.

I love this country. I don't remember loving it or hoping more from it than today."

"Am I out of step with the country or just out of step with the pundit class? The things I'm told to like about Barack Obama's persona turn me off, and the things that are supposed to be disturbing seem appealing.I got my first inkling of this during the debate season, when the conventional wisdom had it that Obama was at his best when giving a speech and that he suffered when he had to share a stage with someone else. Whereas I always thought his speeches were platitudinous mush but enjoyed his debate performances, where he proved himself able to think quickly on his feet and crack a few unscripted jokes. The Obama of the speeches is a bore; the Obama of the debates seems like a man with whom I'd enjoy a friendly
political argument over lunch.

Now we have the Jeremiah Wright "scandal," which frankly makes me like Obama more. If you don't have a friend -- a real friend, someone who means something to you and sometimes influences your decisions -- who occasionally expresses a nutty opinion ("The government lied about inventing the HIV virus as a means of genocide against people of color") or an impolitic truth ("a country and a culture controlled by rich white people"), then you really, really need to get out more. Obama's connection to Wright is like his cigarette habit, his willingness to talk about his past drug use, his fondness for gritty TV shows -- it's a sign that there's an actual human being in that suit after all, no matter how empty it may seem when he's blathering about "an insistence on small miracles" and the like. It's a sign he might know a thing or two about the real America after all.This morning Obama delivered a speech on the subject. It goes on endlessly, as his speeches often do, but it makes the essential, obvious point:

"As imperfect as he may be, [Wright] has been like family to me. He strengthened my faith, officiated my wedding, and baptized my children. Not once in my conversations with him have I heard him talk about any ethnic group in derogatory terms, or treat whites with whom he interacted with anything but courtesy and respect. He contains within him the contradictions -- the good and the bad -- of the community that he has served diligently for so many years.I can no more disown him than I can disown the black community.

I can no more disown him than I can my white grandmother -- a woman who helped raise me, a woman who sacrificed again and again for me, a woman who loves me as much as she loves anything in this world, but a woman who once confessed her fear of black men who passed by her on the street, and who on more than one occasion has uttered racial or ethnic stereotypes that made me cringe.

I guess you either understand this instinctively or you don't. And then, of course, there are the people who understand it but will continue to pretend they don't, the better to smear Obama as a secret jihadist, Weatherman, or Farrakhanite." 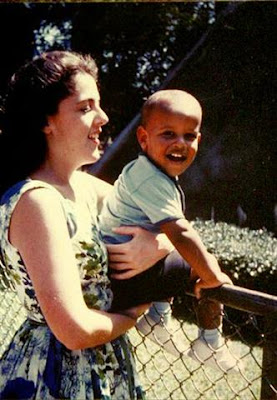 Posted by Dominik Hennig at 5:18 AM

I am very happy to read this article..thanks for giving us this useful information.